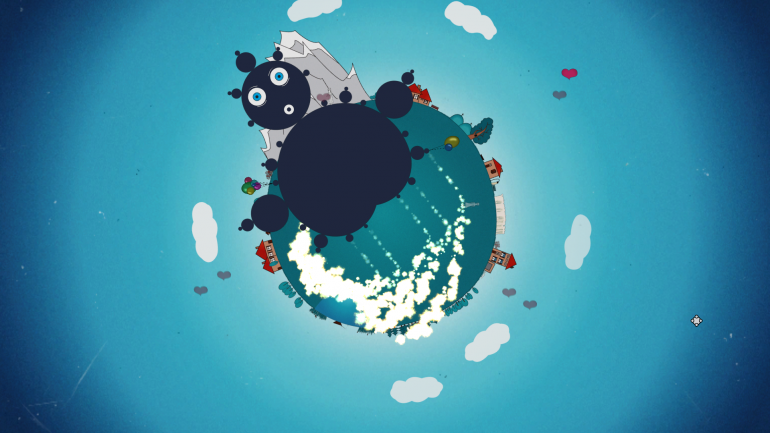 Missy & Mandelbrot: A Wonderful Journey Across the Universe and Beyond

What: The genre of the game is officially called Planetary Puzzle Adventure with Strange Creatures and Epic…well, Epic Something. However, I must admit, we personally prefer just indie.

The ultimate goal of the game is to get Missy out of the strange living world she found herself in by recovering sufficient parts of her crushed spaceship. Mandelbrot is the planet-dude who should not generally be disturbed when he sleeps. And he sleeps a lot.

The player can control both Missy (move around, interact with stuff, jump, etc.) and Mandelbrot (rotate). Missy has to feed Mandelbrot enough hearts that float around him. To reach those hearts, she has to pick up balloons that grow on Mandelbrot’s surface and allow Missy to jump higher.

Mandelbrot himself measures his hunger in NOMs. The more NOMs he has, the more hearts he must eat in order to wake up. When Mandelbrot wakes up, he finds a rocket part for Missy and moves on to the next world to sleep in it.

As you move along the plot line, getting rocket parts becomes harder, and you have to solve increasingly difficult (and hence fun) puzzles to reach them. In the end, you will (hopefully) have enough rocket pieces to get her out of here.

Portal: The Board Game
Dédale